CATALONIA --- The case of the Catalan political prisoners - VilaWeb

The case of the Catalan political prisoners - VilaWeb

◼️⬜️ Not only has #Spain not complied with the UN Working Group on Arbitrary Detentention calls to release #Catalonia's political prisoners, but it has also attempted to discredit it in order to get away with ignoring international law.

Revealed: The King of Spain's half-a-million-dollar secret honeymoon paid for by disgraced father:

Revealed: The King of Spain's half-a-million-dollar secret honeymoon paid for by disgraced father


Call it a dream honeymoon, taking the lucky newlywed royals to the Pacific islands, under Californian sunshine and through wind-carved caves in the Middle East. It cost a cool $500,000, and the details were shrouded in secrecy. 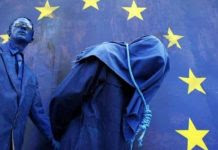 Note:
the data in the following article takes into account the state of the
Greek economy and society before the recent coronary crisis. According
to the IMF, Greece will suffer from a greater depression than all other
members of the EU due to the pandemic, but nothing is certain for the
moment. In any case, the
economic and social results of the crisis will make things in Greece
much worse than those already described in our article.

In
May 2010, the EU, the ECB, the IMF and the Greek government signed a
loan agreement describing an unprecedented “rescue program” for Greece. The
declared objective of this program was to “save” Greece from bankruptcy
and to “help” it to recover its economy and public finances while
repaying its loans, mainly from European banks.

The World Organisation Against Torture (OMCT) works with around 200 member
organisations which constitute its SOS-Torture Network, to end torture, fight
impunity and protect human rights defenders worldwide. The OMCT is writing to
you on this occasion to reiterate[1] its serious concerns regarding the breaches of the rights of freedom of
expression and peaceful assembly in the case of Mr. Jordi Cuixart i Navarro,
President of the non-governmental organisation Òmnium Cultural[2]. 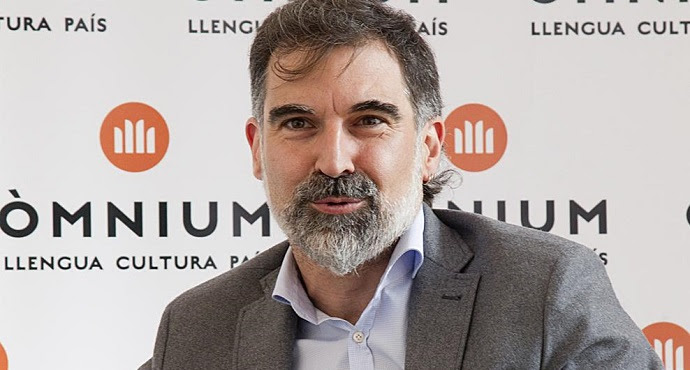 This morning the president of the United States threatened state-sanctioned murder in response to “looting,” laying
bare the way in which white supremacy, capitalism and the state work
together to violently repress people who defend Black life.

But Trump’s angry outburst is not the only blatantly racist response
we should be interrogating. We also must confront the way in which both
conservatives and liberals have responded to the Minneapolis uprisings
by condemning “looting.”

Protesters in Minneapolis and around the country are rising up
against a lynching and other forms of state violence. How should we
respond to a lynching? Should our goal simply be to publicize it, in the
hope that such publicity will generate condemnation and prevent future
lynchings? This logic is flawed, in part, because lynchings thrive off
of spectatorship. For white supremacists, the act of killing is also an
act of fellowship and opportunity for indoctrination.

Simply spreading images of racist killings and asking the state to
stop killing us is not going to stop them. (In fact, while it’s
important to publicize the fact that these killings are occurring,
sometimes the spread of such images also galvanizes white supremacists.)

And so, for some who oppose racist killings, watching the videos,
waiting to vote, and marching in protest feels like enough. But for
others, more intervention is needed. The murder of George Floyd by
Minneapolis police comes on the heels of the killings of Ahmaud Arbery in Brunswick, Georgia, and Breonna Taylor in
Louisville, Kentucky. These killings were committed by current and
former law enforcement. Understandably, outrage is growing.

We should expect uprisings. We should expect property to be damaged,
as people rise up against the racist systems complicit with racist
violence. Many of the people taking part in these revolts have decided
that respecting property is not more important than respecting Black
life. There is an awareness that if the law doesn’t respect Black life,
then the law itself cannot be relied on for protection or given undeserving respect. So, as protesters are being accused of “looting” and “rioting” in Minneapolis or anywhere else, this time demands that we reflect on the systematic robbery of Black America.

Corporations in the United States, again, have walked away with an
unprecedented and astronomical amount of money in 2020. With no
accountability in sight, there was little to no opposition to their
monumental robbery. They were handed trillions. Politicians working in
service to the corporate elite — and afraid of appearing opposed to a
deal that would largely benefit Wall Street — pushed it through. Of
course, the deal left many vulnerable people in the dust. No changes
were made after the unresolved debt crisis of 2008 that
brutalized people around the world with the starvation we know as
austerity. Cuts to social needs have fallen on the public undeterred
while the rich continuously grow richer than they’ve ever been. 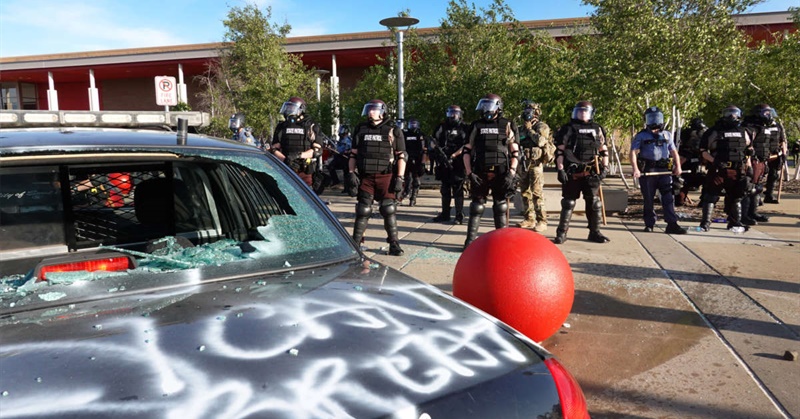 Police stand guard outside of a Target store on May 28, 2020, in St. Paul, Minnesota.
SCOTT OLSON / GETTY IMAGES

No, We Should Not Condemn Uprisings Against Police Murders Like George Floyd's

No, We Should Not Condemn Uprisings Against Police Murders Like George Floyd's


No, We Should Not Condemn Uprisings Against Police Murders Like George Floyd's

The uprising in response to George Floyd’s murder by a Minneapolis
police officer this week has led to predictable calls to condemn
looting. But the real looting in our society comes from the military,
the police, the pharmaceutical companies, private equity, the landlords,
the real estate speculators, and the billionaires — not protesters
against police brutality.

In the aftermath of a Minneapolis police officer’s murder of George
Floyd, some of our nation’s media have turned to some crucial questions
which must be addressed:

Should we condemn looting?

Yes, we should condemn the looting of the Global South by Western
militaries and multinational corporations. We should fear the terrifying
possibility that the COVID-19 vaccine will be enclosed, privatized, and
sold for profit; and the looting of underdeveloped nations and
underinsured people that would ensue.

We should fight back against the looting of underdeveloped nations’
coffers by odious debts and structural adjustment programs being drawn
up and imposed by international institutions at this very minute.

But should we care about the other kind of looting?

It would take a heartless monster not to care about the looting of
homes and buildings by vulture capitalists. We should organize against
the impending wave of evictions that will crash into our communities as
soon as courts reopen. And we should fight back against the theft of
stable homes and schools; the unnecessary destruction of lives due to
their prioritizing food over rent.

We care that whole working-class communities will be gentrified,
their buildings replaced with housing for wealthier, whiter families,
who bring in a bigger haul of loot for the landlord. We should be
outraged that police are looting homeless people’s encampments, and we
must demand that safe vacant homes and rooms no longer be hoarded away
from unhoused people.

Should we care about actual looting?!?

Of course! Private equity stands to make a fortune off the bankruptcy
of businesses around the country. By firing workers and raiding their
pensions, they’ll make off with the bag. We care about the attempt to
loot the United States Postal Service, for example, destroying countless
good union jobs and an essential public service in order to dismantle a
publicly owned institution and turn it into a private business to
generate profit.

We are outraged by the ongoing looting of local and state government
welfare programs by a federal Republican Party that wishes to see them
destroyed and a House Democratic leadership whose solution to this issue
is to give the rich in blue states a gigantic tax break. We are
disgusted that representatives who claim to stand for workers and
oppressed people will gladly allow their standards of living to collapse
while passing tax cuts for the rich.

Without organizing a powerful labor fightback, we will see the actual
looting of public coffers while the billionaire class has become $434
billion richer during the pandemic.

Protesters are shot with pepper spray as they confront police outside
the Third Police Precinct on May 27, 2020 in Minneapolis, Minnesota.
Stephen Maturen / Getty

The protests that have engulfed American cities in the past week are
rooted in decades of frustrations. Racist policing, legal and
extra-legal discrimination, exclusion from the major avenues of wealth
creation and vicious stereotyping have long histories and endure today.

And in what became known as the "long, hot summer of 1967", anger in America's cities boiled over. The Civil Rights Act
of 1964 had ended segregation, but not brought equality. Racial
injustice at the hands of police remained. Protesters took to the
streets in more than 150 cities, leading to violent clashes between black residents and largely white police forces.


White moderates condemned these armed rebellions as the antithesis of
the famed nonviolent protests of civil rights activists. But Martin
Luther King, Jr., himself, recognized that the success of nonviolence
lay in the ever-present threat of violence.


He noted, too, that riots "do not develop out of thin air."


Policing practices a trigger for unrest


The trigger for African-American uprisings in the US has almost always been acts by police forces, such as the recent death of George Floyd in Minneapolis.


Sometimes, unrest has broken out when police have refused to act on
behalf of black residents. When an African-American teenager drifted
into the "white" part of Lake Michigan in Chicago in 1919, for instance, a white man on the banks threw rocks at him and he drowned. A policeman did nothing to stop the assailants, nor did he arrest them.

From the perspective of those targeted and traumatized by police and
discriminated against by society at large, property damage and looting
were justified.


In the century after slavery ended in 1865, white Americans had established new ways to exploit black people's labor and keep African Americans impoverished. These methods ranged from legislation governing work contracts and mobility to racist stereotyping.


Such laws and customs were all underpinned by violence, including murder. From the late 1800s until 1950, more than 4,000 African Americans
were victims of lynchings. They were so acceptable they were sometimes
advertised in the press in advance. These were extra-judicial killings,
but often included the police (or they would at least turn a blind eye
to the proceedings).


Black Americans who sought better lives in northern cities found
racism there, too. White landlords had a captive market in segregated
neighborhoods, such as New York's Harlem and Chicago's South Side, which
caused them to become increasingly crowded and rundown.


African Americans were often kept out of nicer neighborhoods in
cities nationwide, either through violent acts perpetrated by white
residents or even by police officers themselves. The houses of
middle-class black Americans in the Birmingham, Alabama, suburb where
political activist and philosopher Angela Davis grew up were bombed so
often the area was nicknamed "Dynamite Hill".


Even the presence of black officers in the police forces of northern cities could not alter the fundamentally racist operations of police forces. 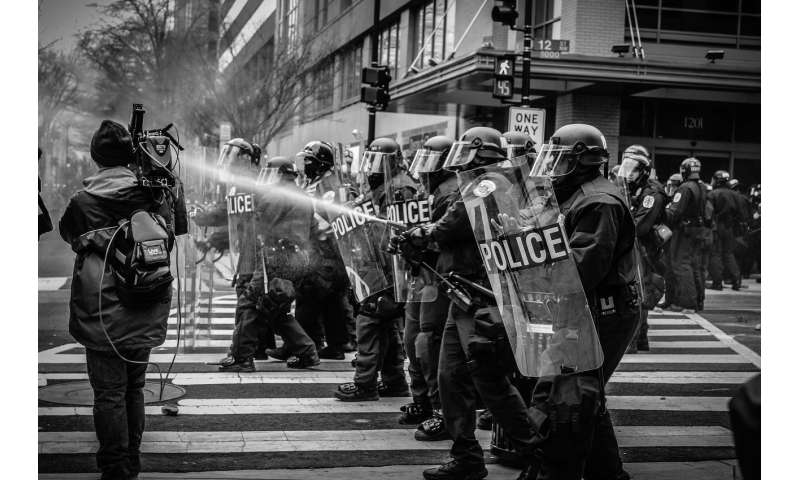